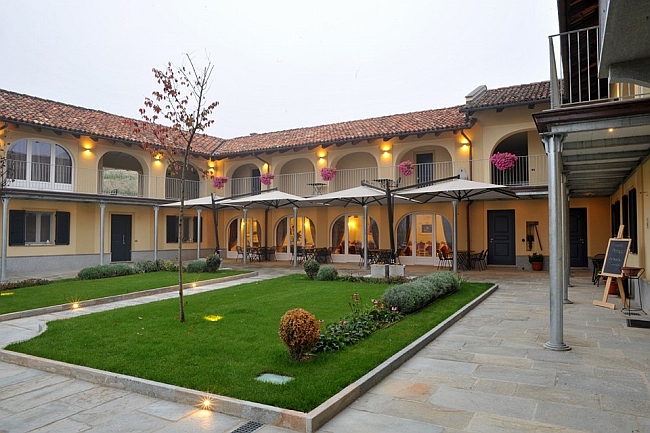 Surrounded by Roero hills (region of Piedmont) and located in Castagnito, in province of Cuneo and few kilometers from Alba, Cascina Varìe is a farmhouse with traditional piedmontese cuisine.

The facility has ten large and comfortable rooms, divided in three categories: Comfort, Superior and Suite.

At the farmhouse Cascina Varìe you can taste typical dishes of the traditional piedmontese gastronomy, all prepared with quality raw materials that come from the farm’s cultivation.

Some examples? Hot friciule (type of pancakes), Raw meat fassone Piedmont, Tajarin (typical piedmontese fresh pasta), Rabbit meat in Barbaresco wine, Bunet (typical piedmontese dessert) and so on. Among the most important production of the farm there are hazelnuts IGP of Piedmont.

In addition, among the activities you can take part to piedmontese cooking courses also in foreign language or you can organize hikings in mountain bike, on foot or riding a horse among the hills and the vineyards of Roero.

Because of Agriturismo Cascina Varìe is located in a strategic position, you can easily reach other cities, such as Alba, Asti, Bra, Barolo, Serralunga di Crea, La Morra to do a trip or to take part to the well-known events in Piedmont: White Truffle Festival of Alba from October to half November, Cheese in Bra and Douja d’Or and Palio di Asti in September.

For a relaxing vacation and to go to discover Roero hills and the traditional piedmontese cuisine, take a trip to Agriturismo Cascina Varìe!

INFORMATION AND BOOKING
COURSES WHICH CAN BE BOOKED IN THIS FACILITY
GO TO WEBSITE
Booking.com